I have covered a few applique finished edges that I like to use here in the past.  All finished edge techniques have a very controlled way about them.  This quilt that I am going to teach caused me to look a little differently at these controlled finishes and try something new. 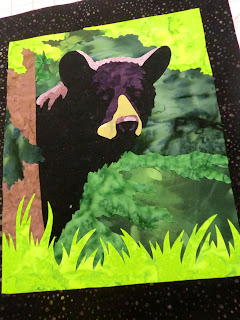 It all began with this Toni Whitney pattern "Backdoor Bear."  Toni developed this pattern for beginners to introduce them to fusible applique and machine quilting. 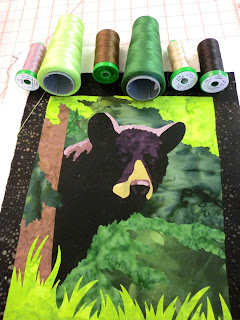 Once appliqued, I selected the threads to use for stitching the raw edges which also quilts the piece at the same time.

Unlike my usual raw edge quilting of following the fabric shapes, Toni choose to stitch a more meandering style to cover the edges.  So I decided to do the same.  As I am going to teach this technique, I also tried free-motion quilting a little differently.  I put on my free-motion presser foot as usual, but didn't drop my feed dogs.  Instead, as I read in an article by Leah Day, I kept my feed dogs up and changed the straight stitch length to 0.  I wanted to see if this may be easier for new machine quilters to have control while stitching. 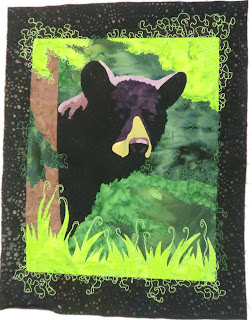 Here I have quilted all of the greenery in the meandering style.  It's easy and there are no such things as "mistakes."  It's all good :) 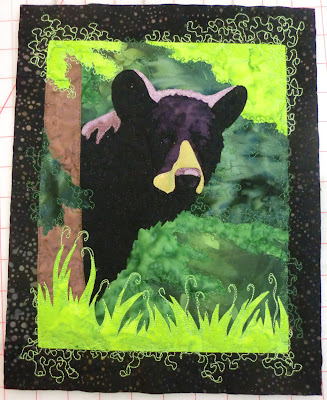 Although difficult so see, the bear and tree trunk are straight stitched.  I didn't, however, worry about following the line exactly.  In fact, I attempted to keep my lines from being too straight to keep with the relaxed look.  I did enjoy this enough to do it again and am sure it will be simple for a beginner to grasp.  The feed dogs up did allow for more control while stitching.  Definitely worth a try. 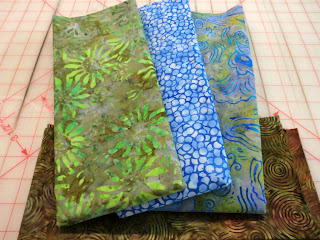 Well, I finally got back to my Rooster.  Here is the fabric palette for my abstract background, which is basically a slash and sew style. 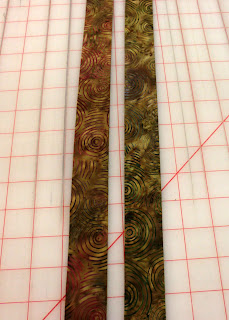 I began by cutting two strips from my accent strip fabric. 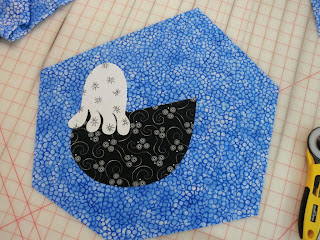 With the center background fabric, I cut an asymmetrical six-sided shape.  Because there aren't exact measurements, I used my Rooster to determine the dimensions that were pleasing to me. 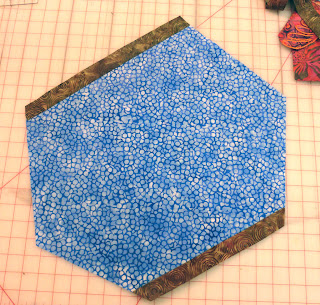 An accent strip was cut to fit one edge and sewn on.  Then repeated for the opposite edge. 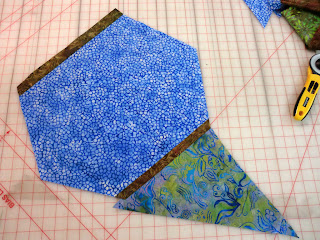 I cut an oversized triangle to sew to the accent strip on one side. 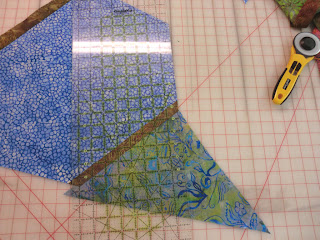 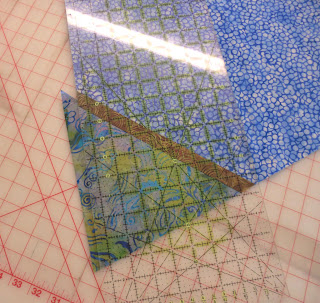 The other side is trimmed up to be even. 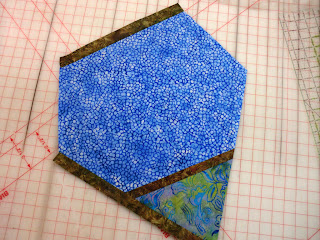 An accent strip is now sewn across both background segments. 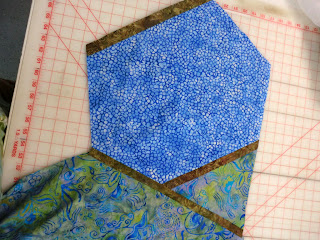 Rather than cut a chunk of fabric, I simply matched the whole fabric piece to the accent strip and sewed it. 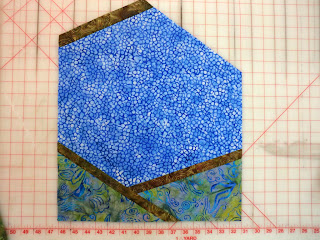 Once sewn, the new segment is squared.  Now I move to the other end to add segments from another fabric. 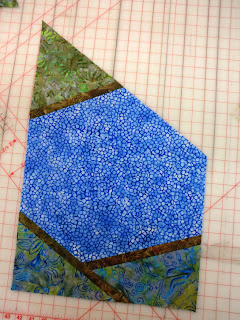 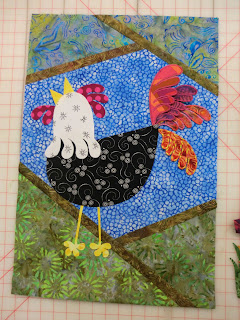 And here it is complete with the Rooster placed but not yet sewn. 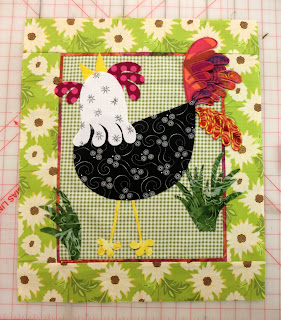 This is the original traditional background I did with the Rooster also placed on it for review.  I'm happy with both backgrounds and now ready to sew them down.

Friday is here and I am unable to think of any finish to share this week (my creative brain is tired).  So I decided instead to share a quilt. 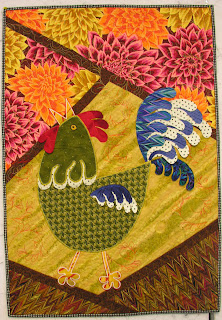 Many of you may remember several weeks back that I began making a Rooster quilt.  That design is being made into a quilt pattern that I will begin teaching this year.  I'm getting ready to begin posting on it again and brought out the photo of the original quilt so I could duplicate the background style.  I really like this background style as it is a bit unexpected and am excited to create a new one for my current rooster.

May you all have an enjoyable summer weekend with family and friends, and maybe get a little time in for quilting too. :) 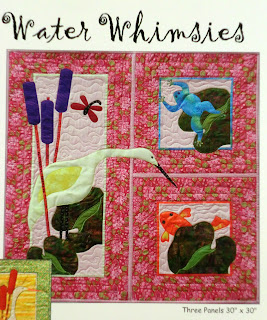 Water Whimsies is a pattern that I had published in 2007 under a previous name of Karri K Designs.  I have developed a kit for it to be sold through my shop, Bigfork Quilts, Etc.  I thought I would go through the steps of making it as this is my favorite way of applique:  satin stitched finished edges. 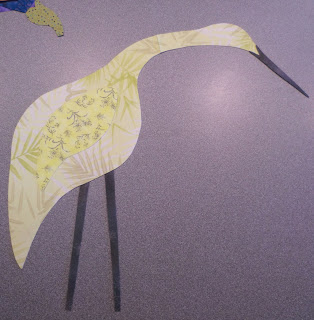 Here is the water bird ready to be stitched.  Cute, isn't it?  I have a bit of work to do before I get to the point of stitching it to the background.  I will go through the supplies I prefer and the construction. 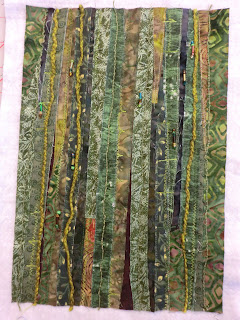 I needed to finish this small raw-edged strip quilt that I began in my Itsy Bitsy Quilt Club last week.  I discussed this on my Bigfork Quilts, Etc. site, but will describe in more detail here. 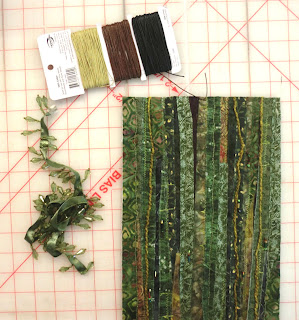 Having finished a previous quilt with a cording for binding, I decided to use the same finish for this quilt.  Once I determined which cording I wanted to use, I realized that it was too thin.  I tried to double it up but it was unmanageable to try to keep along the edge of the quilt as I zigzag stitched it.  So, being a quilter that can sometimes think outside the lines :), braiding the cording came to mind. 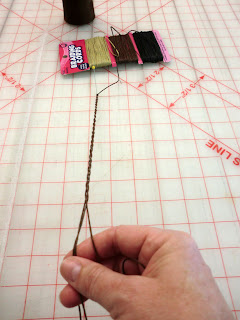 I doubled the cording length needed to go around the quilt and cut it.  Another piece was cut to the single length size.  The cording was pinned into my cutting mat to hold the cording while braiding.  I didn't become overly concerned with the tightness of the braid.  I just braided as was comfortable. 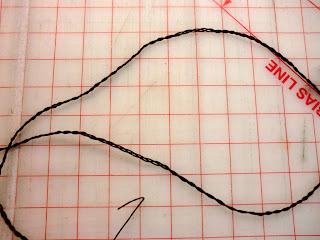 Once braided the cording was thick enough to use for binding.  It was stiffer than a fabric cording which made it easy to hold against the quilt while stitching. 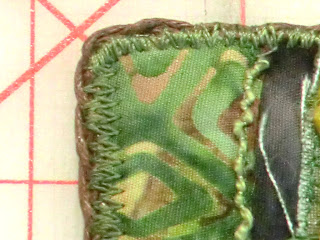 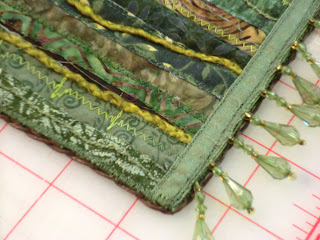 When rounding the corner, because of its stiffness, I held it gently to the quilt and let the stitching catch it as I went around. 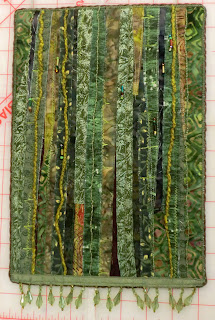 Once complete, I was satisfied with the result.  The braiding closed off the raw edges and added a dark border without changing the look of the original quilt.  When you try this for yourself, I recommend a small quilt as this one is (about 8" x 11") to enable you to have good control until you get a full understanding of how this works.