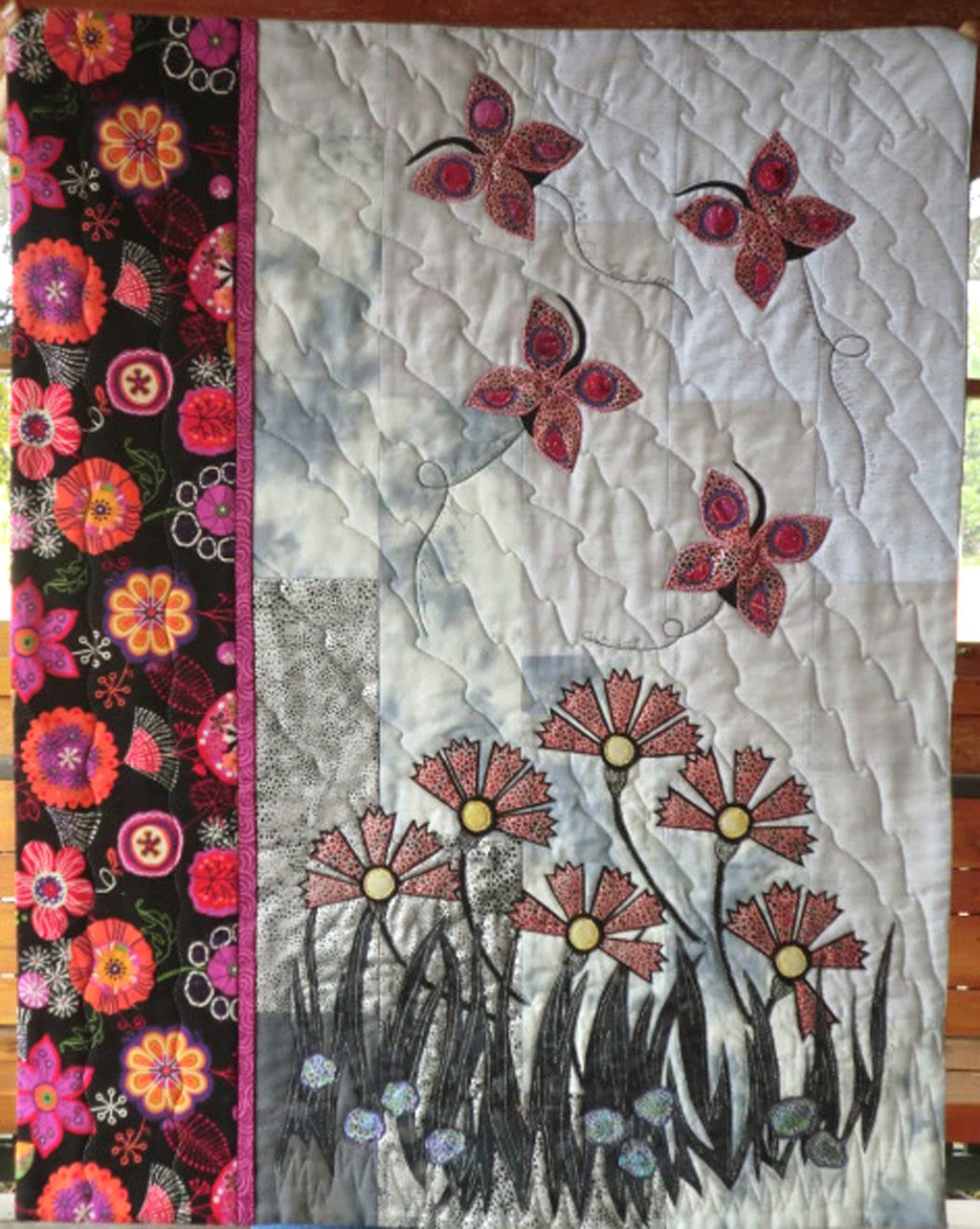 This past week I went on my annual quilting retreat with my very good friends (great quilters too:).  We had four glorious days of quilting, eating, chatting, and sleeping.  I admit that I am not generally the most productive quilter in the group.  I prefer to do more chatting than sewing.  This year, however, was different.  And this quilt is the result.

My excitement lies in the fact that I designed, created, and completed this quilt, something I haven't done in over a year.  As this quilt began as a kit I admit I did have a head start .  The background, flowers, and butterflies were from a published pattern Shimmering Garden in the magazine Quilt Trends, Spring 2014. 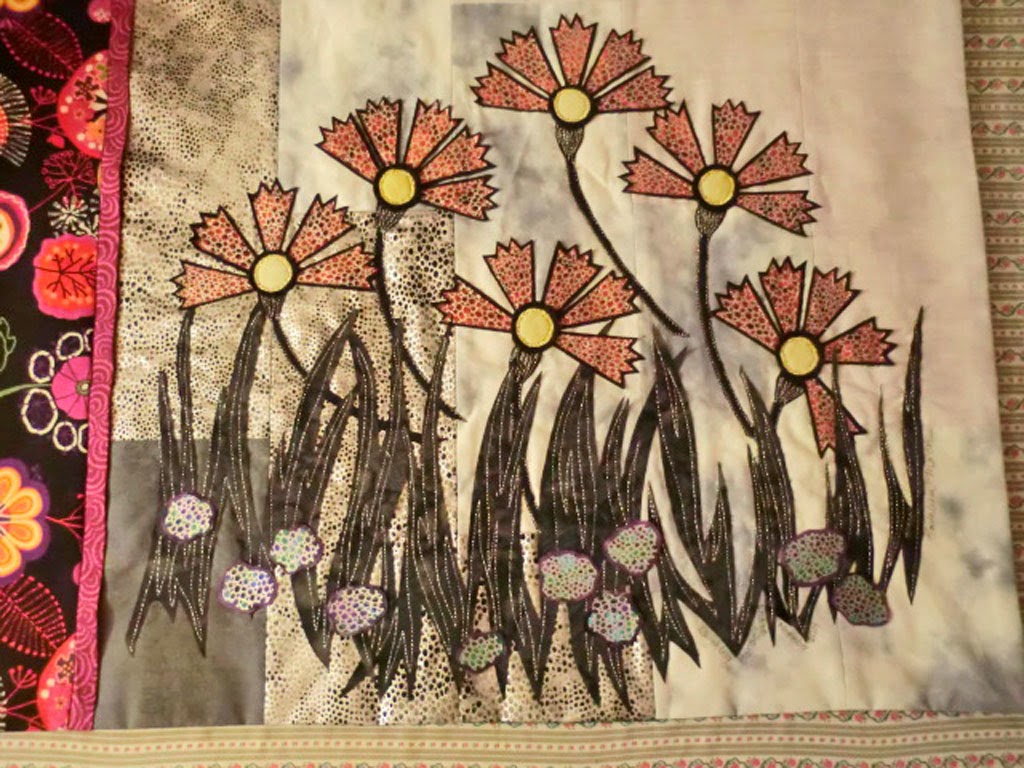 Previous to the retreat, the decision to add the the black print side border had been made.  Once the background and border were sewn together, I added the applique.  With the flowers and butterflies fused in place, the blue and green of the kit were thrown out.  The kit had a piece of charcoal batik for the binding.  It now became the grass.  With the applique fused to the background, I felt the background and border were missing some coherence.  I took them apart, added the pink flange between the border and background, and was happy with the results. 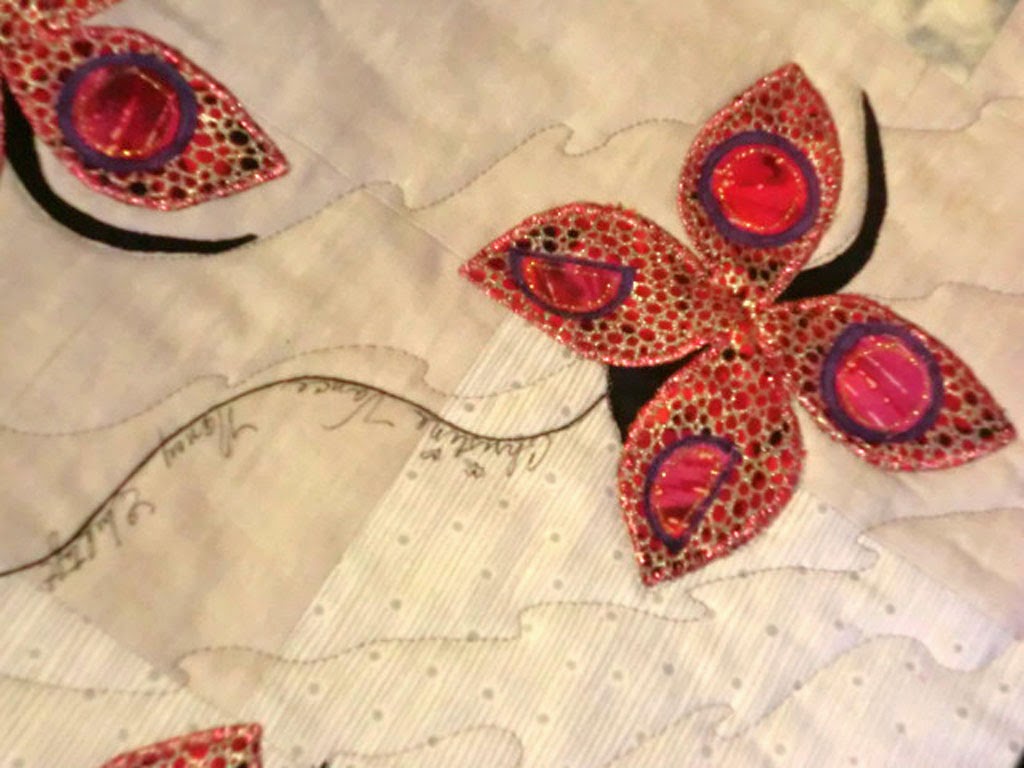 The applique pieces were free-motion zigzagged with metallic thread. 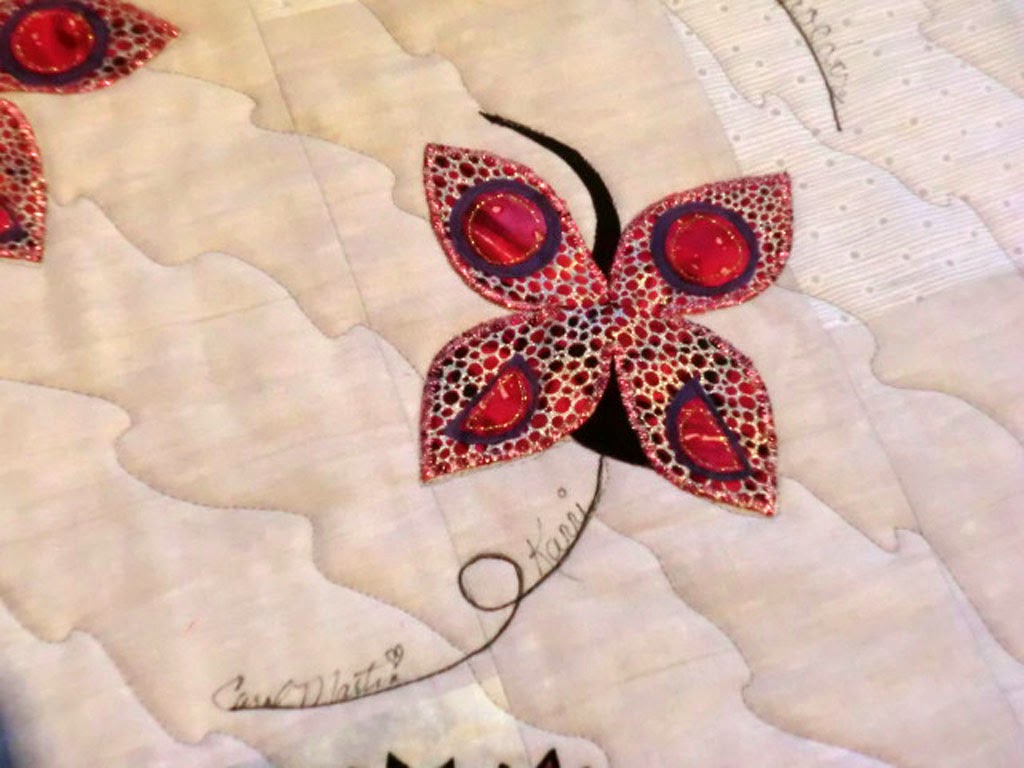 To make this a retreat memory quilt, the quilters signed their names to the butterfly trails with a Micron pen.  It was now time to put the quilt together.  I chose to do the "Escape Hatch" no binding technique I learned from Melody Johnson.   To quilt, I outlined some of the applique and then quilted the background using thread to match.  I was looking for the quilting to give texture, not color.  And I was done in less than two days.  It will look perfect in my home and be a reminder of the wonderful time I had and the best of friends I have. 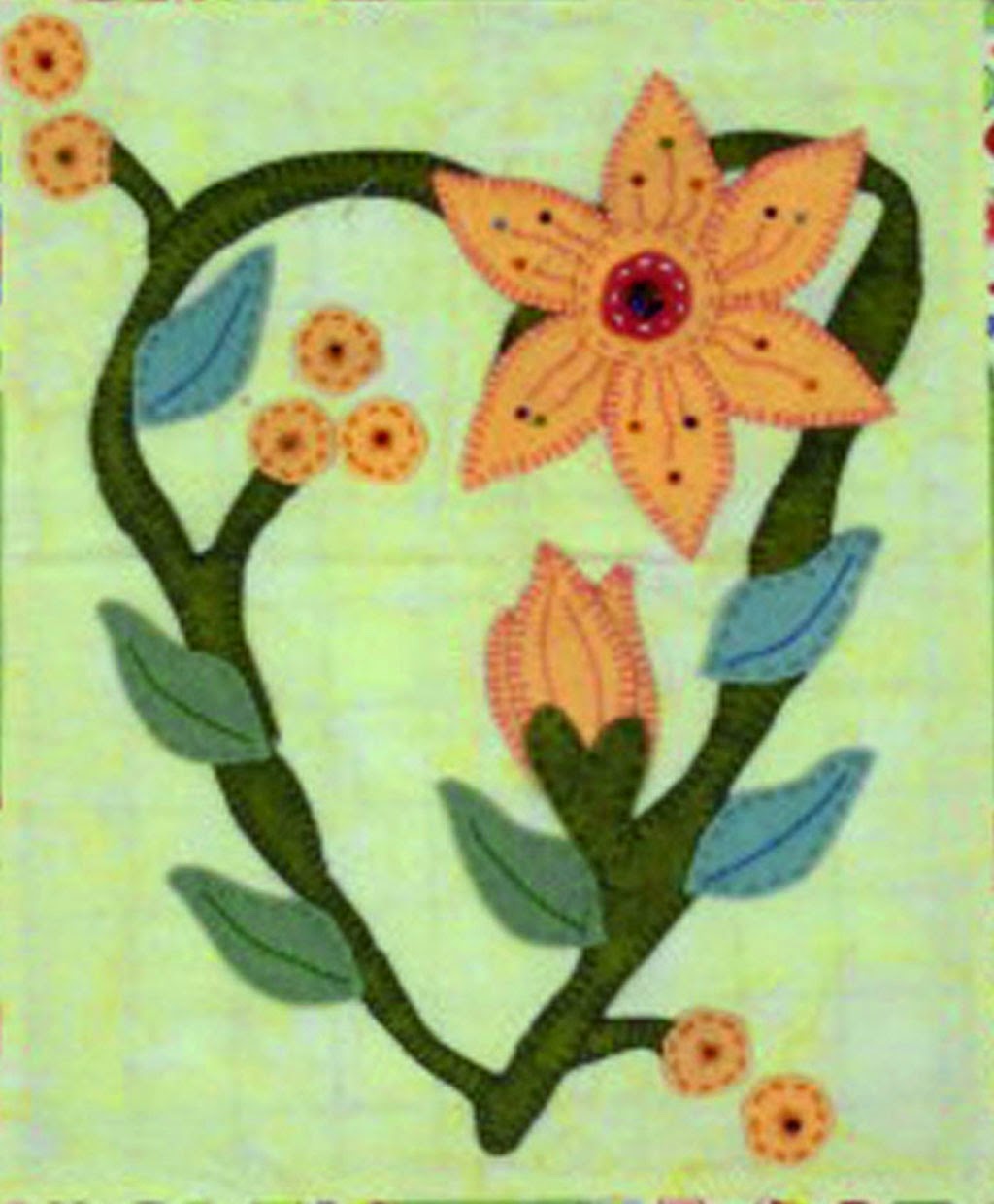 Waaay back in May, 2010 I began a Pat Sloan mystery, Meadow Breeze.  Although Pat Sloan machine stitched her mystery, I decided to make mine a hand project and to use felted wool and wool felt that I had on hand.  Hence its non-completion.  I am currently in a residence transition and don't have much time on my sewing machine.  Therefore, I thought this would be a great opportunity to bring out this UFO (one of many mind you).  Upon pulling it out, I realized that I had stopped progress on it because it needed some background sewn on which to put the applique so I've worked hard to complete the sewing in the limited time on my machine. 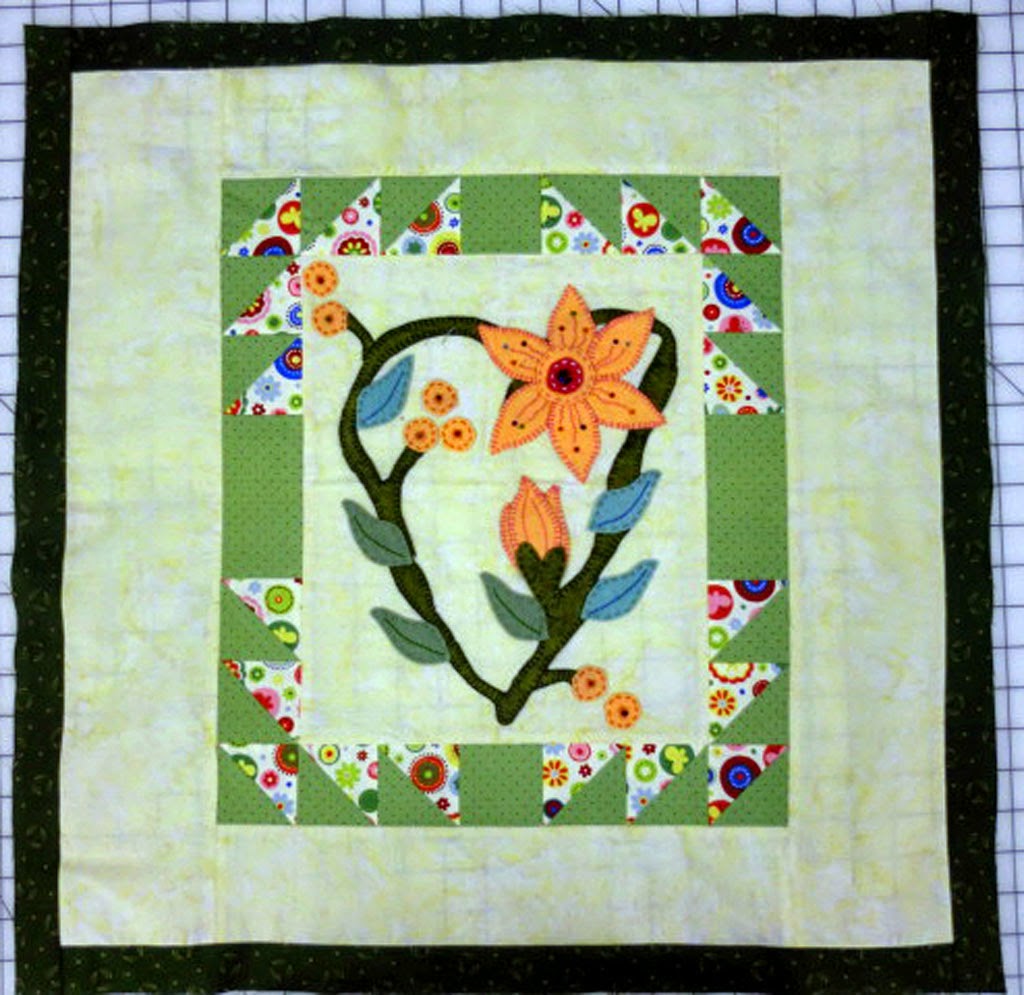 I added the border to the center panel of applique.  There will be more applique added to the entire border.

There are eight of these sections that each have applique and will be added to the center panel once the applique is complete. 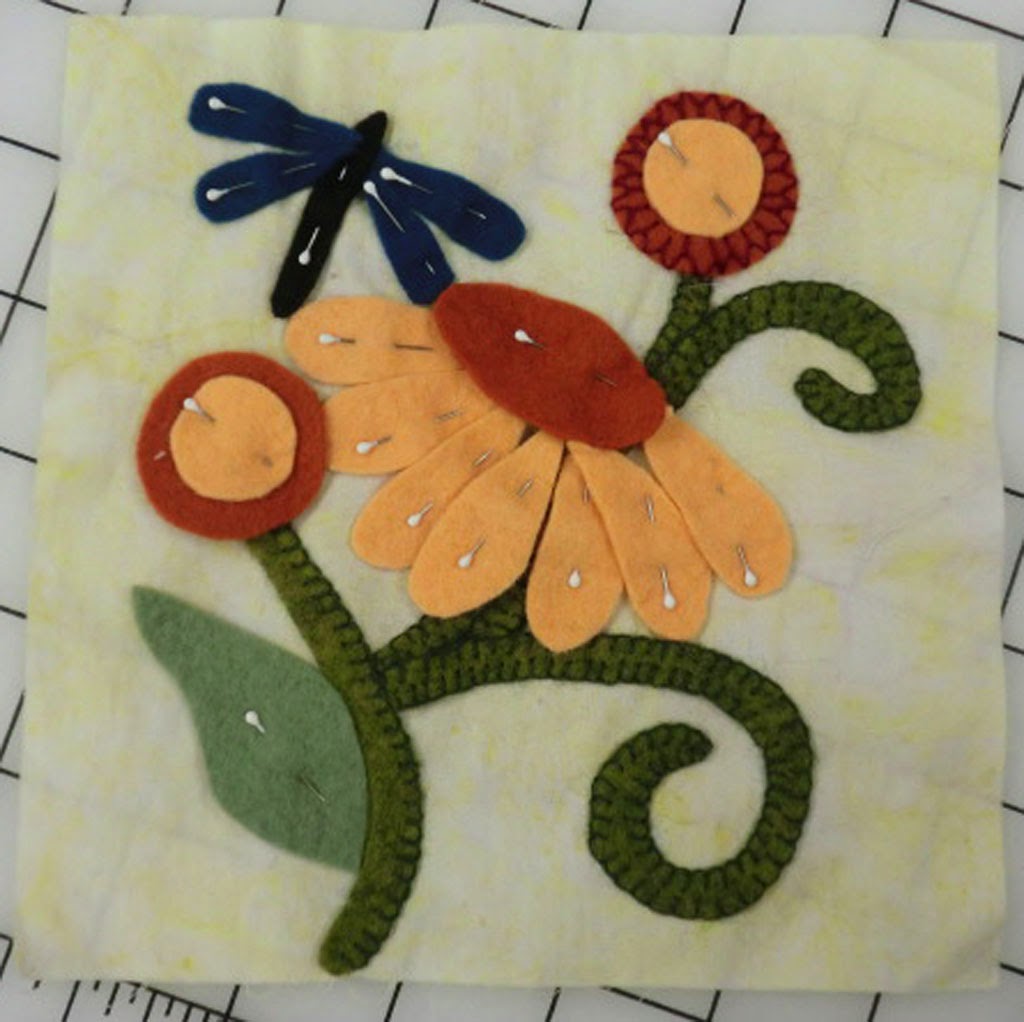 This square is ready to be hand stitched and is one of the four outer cornerstones.  I'm not sure how quick I'll be on all of this but any progress is better than no progress :).

A few months ago in one of my quilt groups, I pieced a few spiderweb blocks.  I have always been enamored with these blocks and found a tutorial from Jaybird Quilts (I love her stuff!).  Once I made two of the blocks I thought to myself, "What are you going to do with these?"  The tutorial is for potholders but I wanted to do something more but I certainly wasn't making a WHOLE quilt.  So, being an art quilter, I thought, "Make a few more blocks and make a small wallhanging." 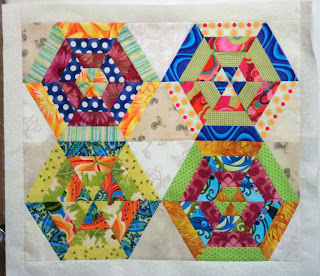 And here is where it is to date.  But being the quilter that I am, I can't stop here.  Oh, noooo.  I am going to applique red to it.  They are going to be red words and it will become my statement quilt titled "Shades of Red."  Keep watching.  I'm really enjoying the word part.

2013 was a year of major life changes due to loves lost.  Quilting, it turns out, is a great therapeutic tool!  I have found that going to my fabric stash and creating a quilt, letting my emotions run with my imagination, has allowed my emotions to transform from debilitating to joy. 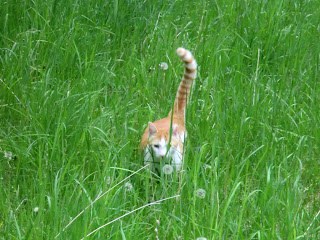 Here is a case in point:  During Christmas, I lost my dear companion, Meowi.  As he was only five years old and I have had other major losses this year, his loss has been almost unbearable.  I was, however, in the process of creating this quilt. 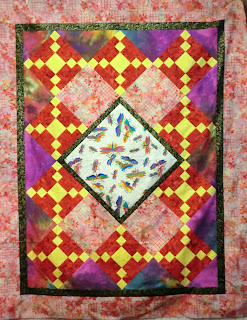 Once he passed, something came to mind.  Seven years ago when my husband passed away, I created this quilt to lift my spirits. 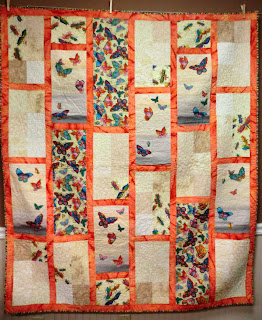 Notice anything similar - Laurel Burch fabric, predominant color orange.  Mind you, I didn't make the new quilt after Meowi passed, but had begun it prior to him being ill. 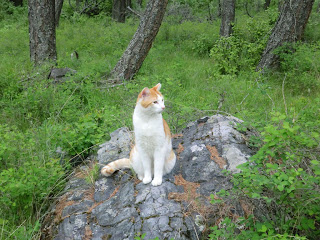 The new quilt's title is "In Meowi's Memory."  I am going to quilt four different facial portraits from his photos in the blank light orange squares.  I received his inked paw print in a sympathy card from the animal hospital where he was put down and I will incorporate that into the quilted worded border and on the label.  As my mind creates all of these ideas, I realize that I am working through the loss by thinking of Meowi: how he participated in my life, what his personality characteristics were like, how his loss will affect our family.  And I cry at the loss, but I smile at the memories.  And this is therapy.

As the quilting happens, I will keep you updated.